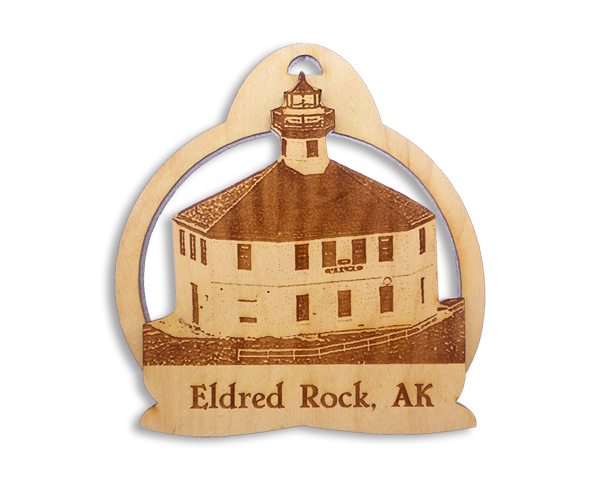 Our Eldred Rock lighthouse ornament is a beautiful souvenir of the cherished memories from Haines Alaska!

Honoring the Eldred Rock Lighthouse and its many fascinating stories, this lighthouse ornament is a perfect addition to your lighthouse collection!

Beginning its notorious history with a story involving illegal transports and the Clara Nevada exploding into flames after running aground, Eldred Rock Lighthouse became a necessity in an area where 90-mile-per-hour winds drove ships to an early end. Many mysteries surround this Alaskan lighthouse, but the violent winds that often plague the area obscure all but rumors and legends.

Your lighthouse ornament will be handmade in our South Carolina studio with years of experience, from Pecan Wood.  We take great care in the creation of each of these engraved ornaments because we know they are going to you to help decorate your home and that is something we cherish.

Thank you for looking at our Eldred Rock Lighthouse Ornament! See our reviews.

Here are some creative uses of using your light house decorations all year long!

There are no reviews yet.